Last weekend we missed a cousin’s party because of Baby E’s bout with the flu. When we got home we found some party favors that had been left for us since we couldn’t make it. Among them were 3 pool noodle horses, which the children immediately took to and have been playing with ever since. This afternoon, right before leaving the new house one of the eyes fell off of Baby E’s horse. He was devastated, so I told him I would find some glue and repair it for the ride home. The only thing I could find was Gorilla Glue. What could possible go wrong?

Not exact horses, but an almost identical google find.

Well… it turns out Gorilla Glue doesn’t stick so well to pool noodles, which I learned the hard way when I handed Baby E his pool noodle horse while he was strapped in his car seat. He took one look at the eye, yanked it off, and stuck it to his lips… GORILLA GLUE AND ALL!

I dove at him once I realized what he had done and pulled at the googly eye, in an attempt to get it off of him before the glue set. As I grabbed the eye, I felt some resistance and he yelped as the eye pulled away from him… and stuck to my thumb. Yup… googly eye stuck to my thumb, which I then had to pry off as Baby E whimpered in the back seat.

Considering my thumb still has a thin layer of Gorilla Glue on it, it would be safe to say that Baby E’s lips probably do too. I hope he’s happy with a one-eyed horse, because I think it’s going to stay that way for quite some time. 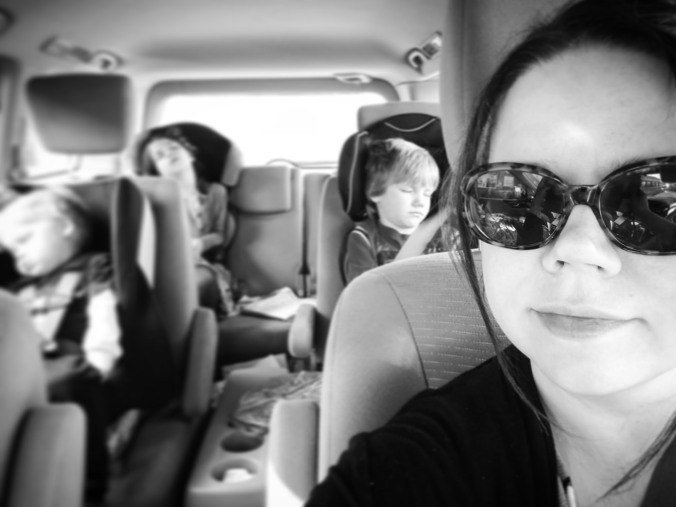 You know what’s unnerving? Having all three kids fall asleep during your hour and a half drive home, only to need to make a stop at the pet store and wake them up to go inside.

I’ve seen a lot of kids that are silly-tired children. My children are not those children. Mine are grumpy-tired children, so I didn’t relish waking them up. There was nothing for it, it had to be done… so I stopped the car and called their names. Baby E came to first. Then Big E. And I had to yell poor C’s name repeatedly before she revived from her slumber. Thankfully the promise to look at all the adoption kitties once inside brought smiles to their faces and the errand turned out to be a pleasant one. I promised them some Rita’s for dessert, so after a quick stop there we made it home with plenty of daylight for playing outside!