We just wrapped up another late night at the shop. These seasons don’t come often, so I don’t really mind them when they do. I actually enjoy the time I spend there. By the time I got home this evening the kids were asleep on the living room floor.

Tomorrow we leave for vacation. Unlike every other vacation that Tim and I have taken during the entirety of our marriage, I have not even packed a thing the night before. Our lives have been so crazy lately, it never crossed my mind. So in the morning I will be throwing stuff in bags and hoping that I didn’t leave anything important behind!

The past few days have been a race against the clock to make sure that everything is in place for when we go on vacation. When you own your own small business, you can’t just drop everything and leave. All the i’s need to be dotted and all the t’s need to be crossed before you walk out the door. Hence the crazy hours we have been putting in over the last week.

To top it off, I have editing clients I can’t leave in the lurch, so when I’m not at the shop, I’m editing. It’s been a crazy busy week but it will all be worth is when we are swimming in the lake or walking down the railroad track.

We spent most of our weekend recovering from our long days and nights at the shop. We slept more than usual and we were just all around lazy. This evening, we decided to take the kids out for some treasure hunting (a.k.a. geocaching.)

We ended up finding three out of the four we were looking for. We tromped through tall grass and weaved our way through thick underbrush. The kids enjoyed opening up the caches and seeing the ‘treasures’ inside. They were disappointed when the sun went down and it got too late to look for any more.

They are already asking when will be the next time we go treasure hunting.

Have you ever been so tired that you’ve started seeing things? It’s never happened to me before until last night.

From 4pm Thursday afternoon until 4 am this morning (Saturday) was a span of 36 hours. Of those 36 hours, I spent about 30 of them at the shop. From Thursday night into Friday, I only got three hours of sleep.

After dinner last night I kept doing double takes because I thought I saw things out of the corners of my eyes- things that shouldn’t be there… A rat. A kid. A puppy. At one point I clearly saw the panel in front off me start to tip over, so I reached out to grab it only to realize it had never moved. Later I was sitting in a chair and even though I wasn’t moving, I was convinced I was falling out of it. I knew logically it was my mind playing tricks on me, but it was such an unnerving sensation.

I was in no state to drive, so I was thankful that my sister wasn’t nearly as tired. We got home close to 5am and after clumsily navigating the staircase I collapsed into bed and straight to sleep. Needless to say, today was pretty much a bust. Hopefully a full night’s sleep will do the trick!

I’m currently running on three hours of sleep. It’s 3:30 in the morning and we are still at the shop. Everything aches and I am having a hard time forming thoughts. We are leaving soon. I cannot wait to crawl into bed.

I just got home from a late night of working at the shop. It’s nearly 4 a.m. Good night.

My kids have been at each others’ throats lately, which I know is totally normal sibling behavior, but it’s driving me crazy. I can’t get through 15 minutes without one of them coming to tattle on the others.

Last night we had a long talk and I came up with a plan. Each child is allowed two tattles a day. That way they have the opportunity to air their grievances if necessary, but they are forced to stop and ask themselves if it is something worth arguing about. Do they really want to waste a tattle on something trivial, or do they want to hold onto it to use it for a true injustice.

We started implementing the plan this morning and it really worked wonders. Every time one of them came up to me to complain about someone else I asked them if they were about to use one of their tattles. I told them it was fine if they did, but that they only had two all together.

I was pleasantly surprised how many times they stopped and thought about what they were going to say. Most of the time they smiled and turned around and walked out of the room. A couple of times they decided to use their tattle, which was fine with me.

Do you know what happened? They got along ALL DAY LONG. It was beautiful. There was far less bickering and much more playing, which meant all of us were so much happier!

Earlier today I went outside to check if my plans had survived the recent storms. Some of my tomato plants were destroyed, and several other plants don’t look well, but there were quite a few that remained unscathed. Noticing how nice the temps were, I told the kids to play outside. I was watching them from the kitchen window as I was making dinner. The boys were running around in their bare feet chasing each other and squealing. C, on the other hand, was wandering around, nose deep in a book.

She’s been like that lately. She is obsessed with reading, which makes this reading mama’s heart very happy. She going through multiple books a day, which means she should be ready for something more challenging pretty soon.

I’ve been making a mental list of books I want to introduce her to, but I would welcome any suggestions. (When we did her homeschool review, she tested at a 6th grade reading level.)

So far I have-

We spent most of our day out of the house, keeping ourselves busy until the lights came on. The storm that hit us yesterday did quite a bit of damage in the immediate area of our neighborhood, but not much else anywhere else.

We took the kids to IHOP for breakfast and then made a leisurely trip to Walmart and then the library.

We are all just happy to have air conditioning, running water, and flushing toilets again!

An impressive storm came raging through this evening. It battered the house from every direction with crazy winds and hail. And check out that lightning map! 😳😳 I’m not surprised we lost power, I just wonder how long it will be down. 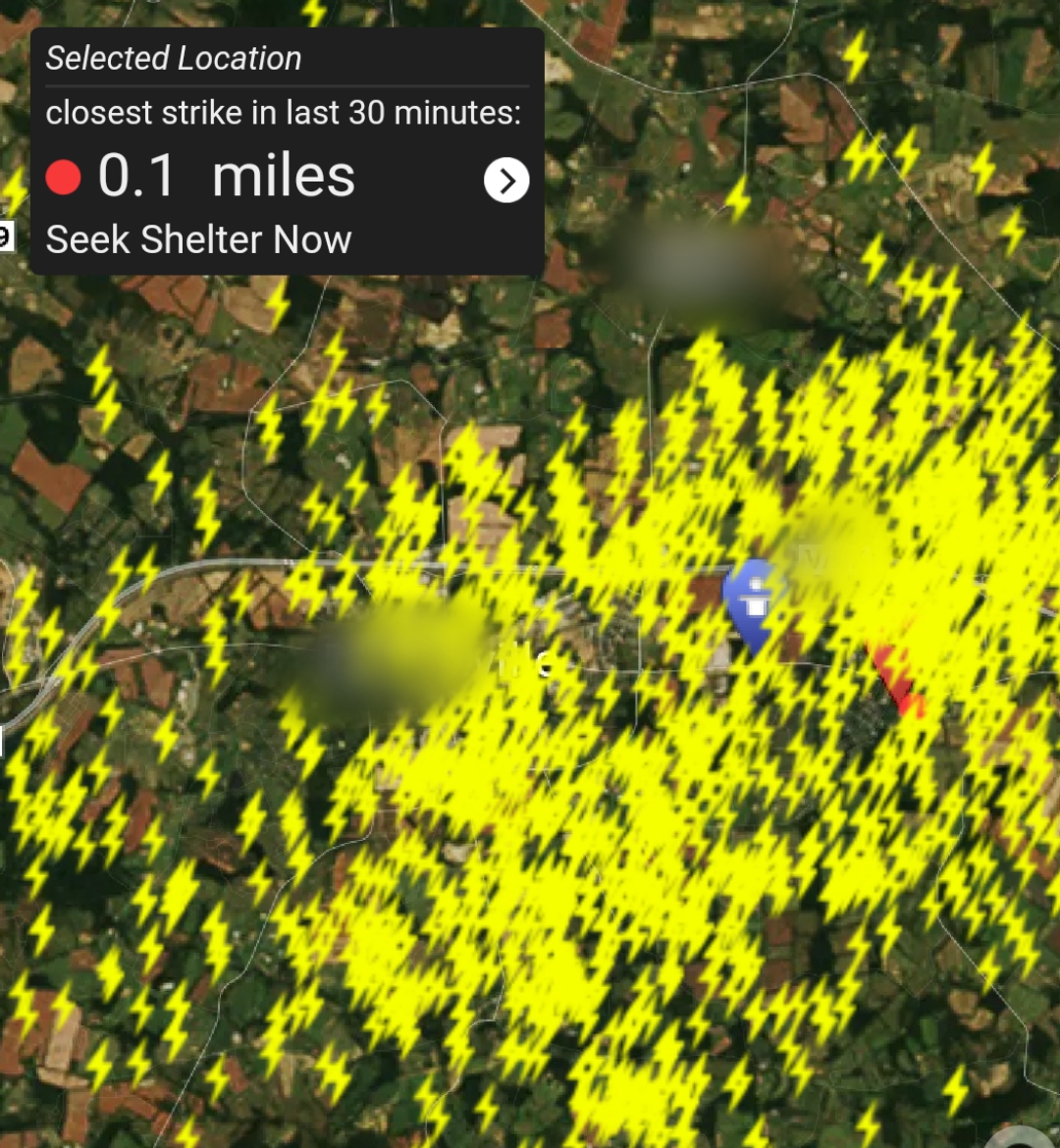