I regret to inform you that our great caterpillar experiment of 2019 has come to an untimely end. Our dear caterpillar friend Shadow died sometime this afternoon.

I’m not sure if he was already ill when we found him in the garage, or if Big E did internal damage when he stepped on him (externally he looked fine), or if I’m just really bad at keeping bugs alive, but he never adapted to his new surroundings. He laid on his back most of the time and wiggled his little legs.

This morning I made an executive decision to take him back outside. I kept an eye on him throughout the day, but by this evening he was dead.

The kids haven’t asked about him, and I haven’t brought it up. Oddly enough, I think I was the most attached.

It’s ok. I’ve got my eyes open for the next inhabitant of out bug hotel. Perhaps we’ll have better luck!

I had some down time today and I decided to try a program a friend recommended to me. Character Animator is part of the Adobe Creative Suite and one of the few programs I hadn’t even opened before.

I spent some time watching tutorials today, and by the time I was finished I had this little character that I created that would respond to sound and movement from my webcam.

The best part was that it entertained my children for nearly an hour as they talked to the screen watching his head bob with their motion and his mouth move along with their words.

Once a year the university that I used to work for opens its doors and invites the community to come on campus and see all the amazing things going on. The day is jam packed with activities and events for the whole family. It always lands on my birthday weekend, and up until this year I have always had to work the event. This year we decided to go ‘for fun!’

It was fun being back on campus and seeing so many old colleagues and friends. It made me nostalgic for my time there, but I wouldn’t change places for anything. I am so grateful to have this opportunity to be home with my children and watch them grow.

Thank you to everyone that wished me a happy birthday! It was a wonderful day filled with flowers, a trip to the movies, bubble tea, and Thai food. (Just a few of my favorite things!)

Science doesn’t always happen at ‘school time.’ Sometimes it happens when we see a rainbow, or we recycle our garbage, or we eat melting popsicles. Yesterday it happened as I walked into the garage and saw a large, fuzzy, black caterpillar in the middle of the floor.

I should probably preface this story with “I hate bugs. All kinds. No exception.” (except perhaps the occasional butterfly, ladybug, or firefly.) A few weeks ago at Target I saw one of those little bug cages in the dollar section and picked it up thinking, not too enthusiastically, that maybe we could put it to use.

I came inside, excited to tell the kids about my plan to capture the little guy and watch his life cycle. The kids got almost giddy at the plan, jumping up and down and talking about their new ‘pet.’ I looked on Google to figure out how we needed to care for him and it said we should get leaves from the tree we found him in. Since we found him in the garage, it was a no-go, but I told the kids to go to the backyard and find leaves for him to nibble.

The kids hurriedly got on their shoes and they all ran out the door and through the garage. They hadn’t been gone more than a few seconds when I heard the door open and C came walking back in with a look of dejection on her face. “Big E stepped on him,” she said.

“Wait? What??” I replied. They had literally just walked out. How did that happen?

Apparently in his enthusiasm, Big E ran through the garage and stepped right on the fuzzy mass without even realizing it. He followed C in a moment later to say that our new friend wasn’t looking so good. I went out to check, expecting to see squished caterpillar all over the garage floor, but instead he was laying on his back, all his little legs reaching to the sky. Afraid he had assumed a ‘death pose’ I warned the kids he might not live. That didn’t stop them from asking me to still catch him (using the ‘cooking pliers’ aka kitchen tongs) and naming him. So, I scooped him up, put him in the container with some leaves and twigs. The kids named him Shadow and immediately fell in love with him.

But Shadow didn’t seem to be doing so well. Every time I tried to right him, he would flop back over and stick his legs straight up. Soon the kids went from talking excitedly about Shadow to preparing themselves that they might have to bury him soon. They began planning his funeral, as he laid there listening to them. C said she wanted to be the one that buried him, and both her and Big E started tracking down items they could use as a marker for his grave.

But they continued to hold out hope that he would survive, and amazingly he has improved over the last 24 hours. He has started moving around and drinking the drops of water we have managed to get in his cage. He doesn’t seem to like his leaves, so we are trying some grass. So I guess we will continue with our experiment and see what happens. Hopefully no one else will step on him, poke him too hard, or leave his cage door open!

It came as no surprise when we got the email cancelling soccer practice today due to inclement weather. The sky had been cloudy all day, threatening rain.

In lieu of soccer practice, we got together with the “neighbor cousins” and worked on a craft – Wooden Wind Chimes. The kids painted sticks which we then assembled into the chimes. I think the finished product turned out pretty adorable! (To be honest, I’ll take craft time over soccer time anyday!!)

Tomorrow is week four of soccer. The first week rained and it was cancelled. We made it to the second week, even if some of us were struggling with enthusiasm. The third week was cancelled due to thunderstorms.

And tomorrow? Well, it’s forecast to be rainy ALL day. Ugh. Seriously we should have signed up for soccer on a Tuesday. It never seems to rain on Tuesdays.

My sister and I stumbled upon an awesome coffeeshop today. It’s in a renovated church complete with grand arches and beautiful stain glass windows. It was gorgeous! 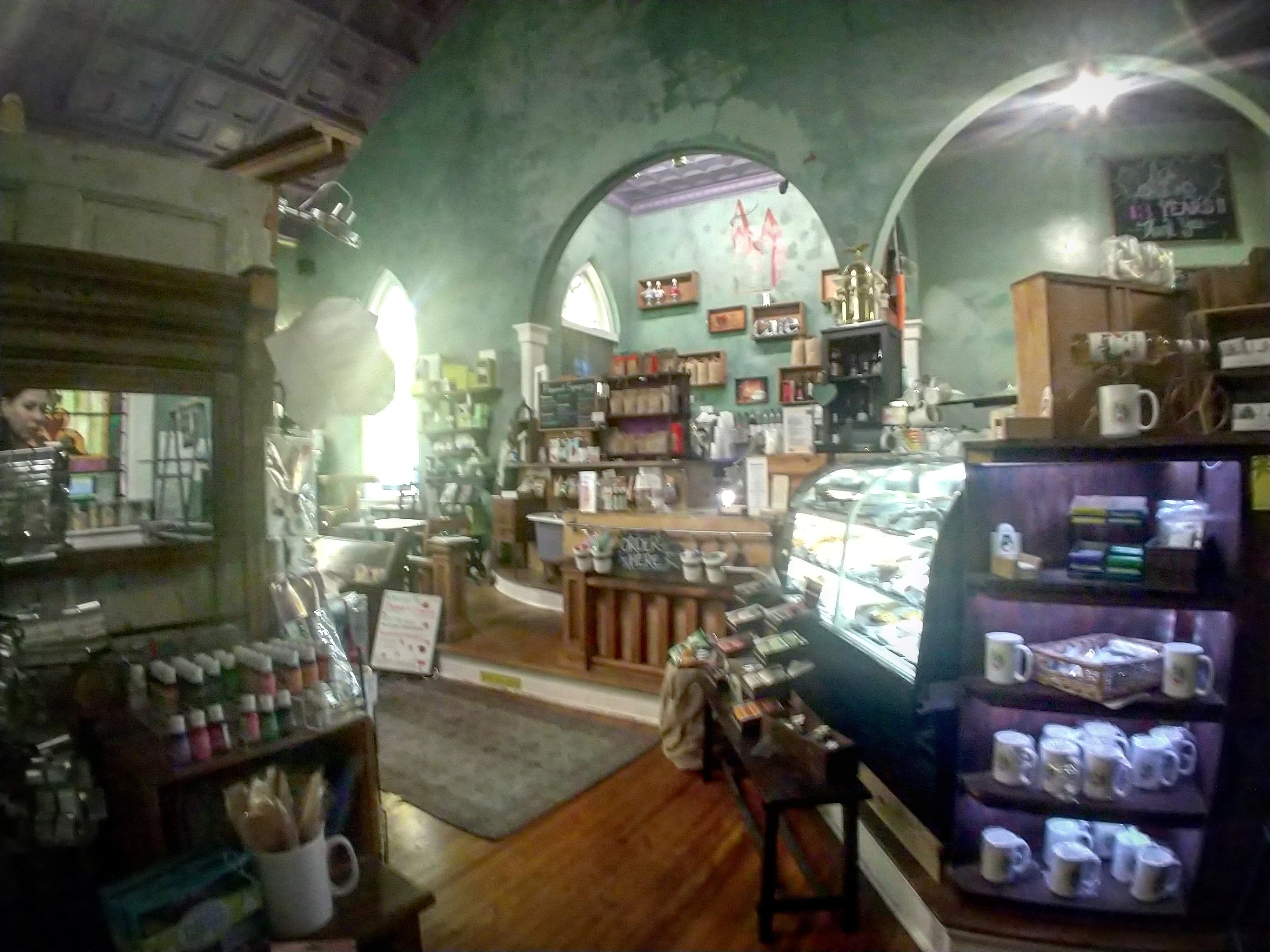 By the time we got home, we were greeted with some adorable art on the driveway. 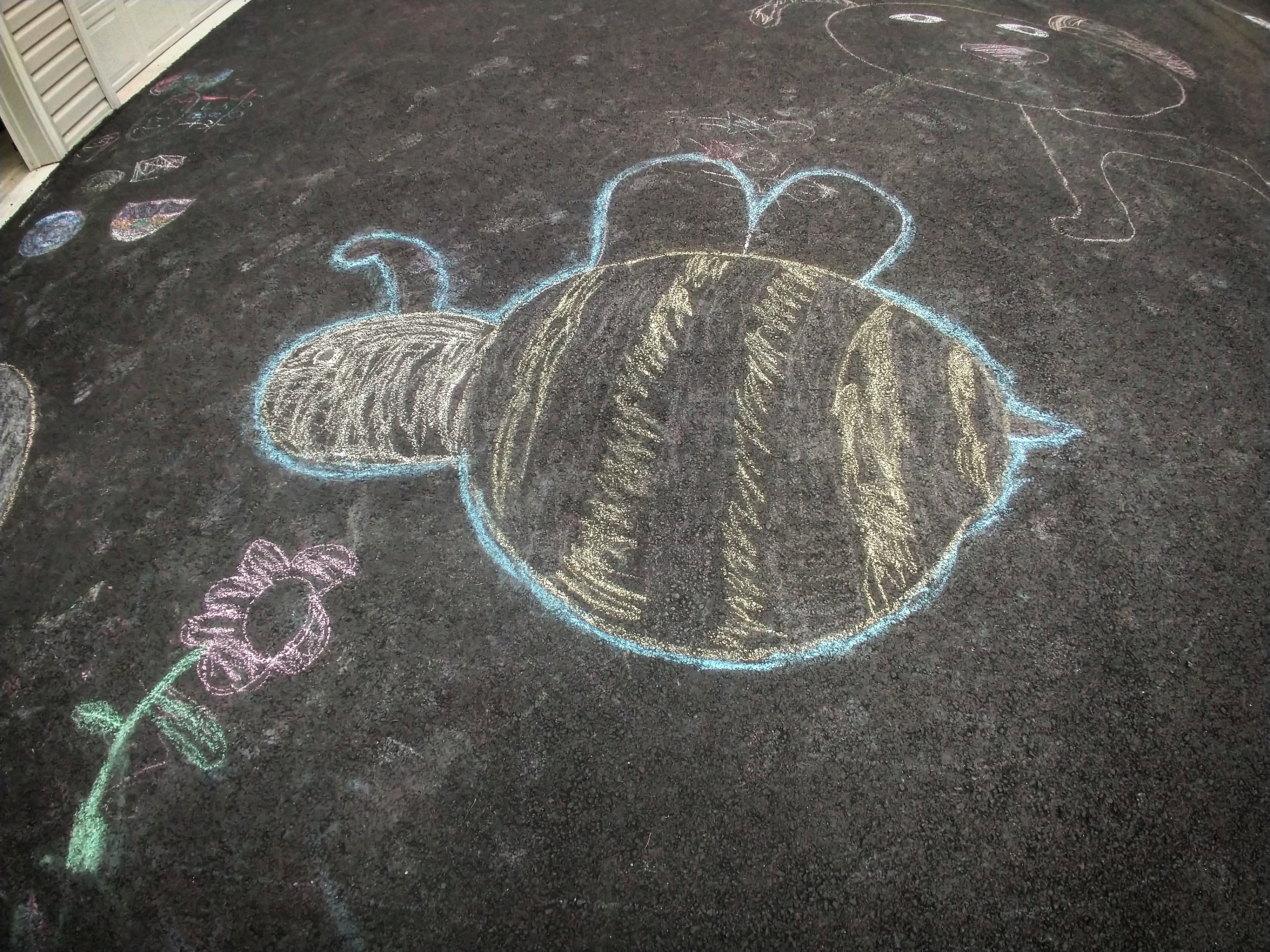 A while ago I signed C up for a homeschool art class and today was their first meeting. We met in a pavilion at a local park. There were seven other students in the class, all around C’s age. The topic for the day was printmaking and the kids did two different techniques- one with paint and shaving cream and the other with tinfoil and markers. C really enjoyed the experience and seemed to hit it off well with the other girls. The class is going to run for five more weeks, so hopefully it’s a great opportunity for her to meet new people and make new friends! 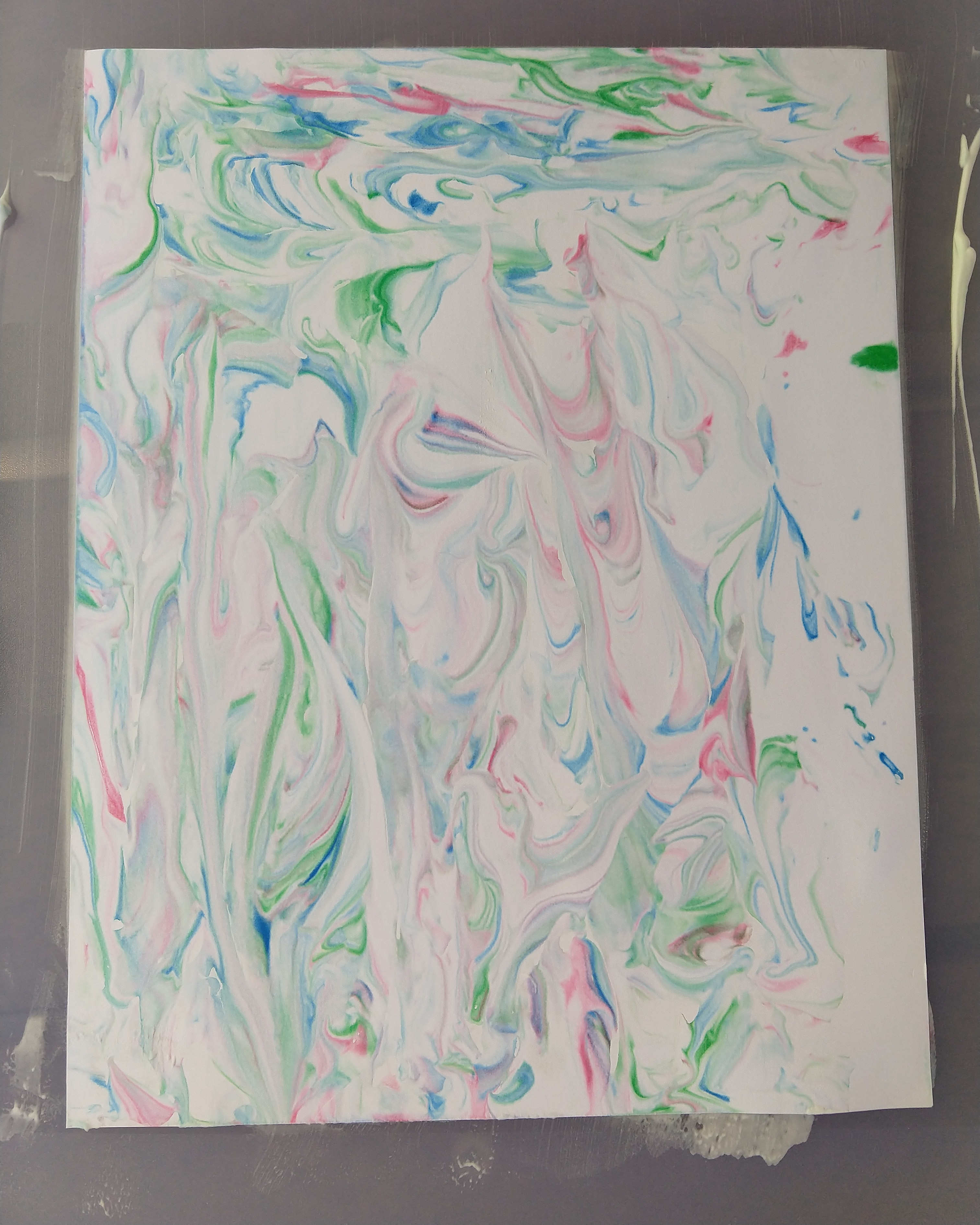 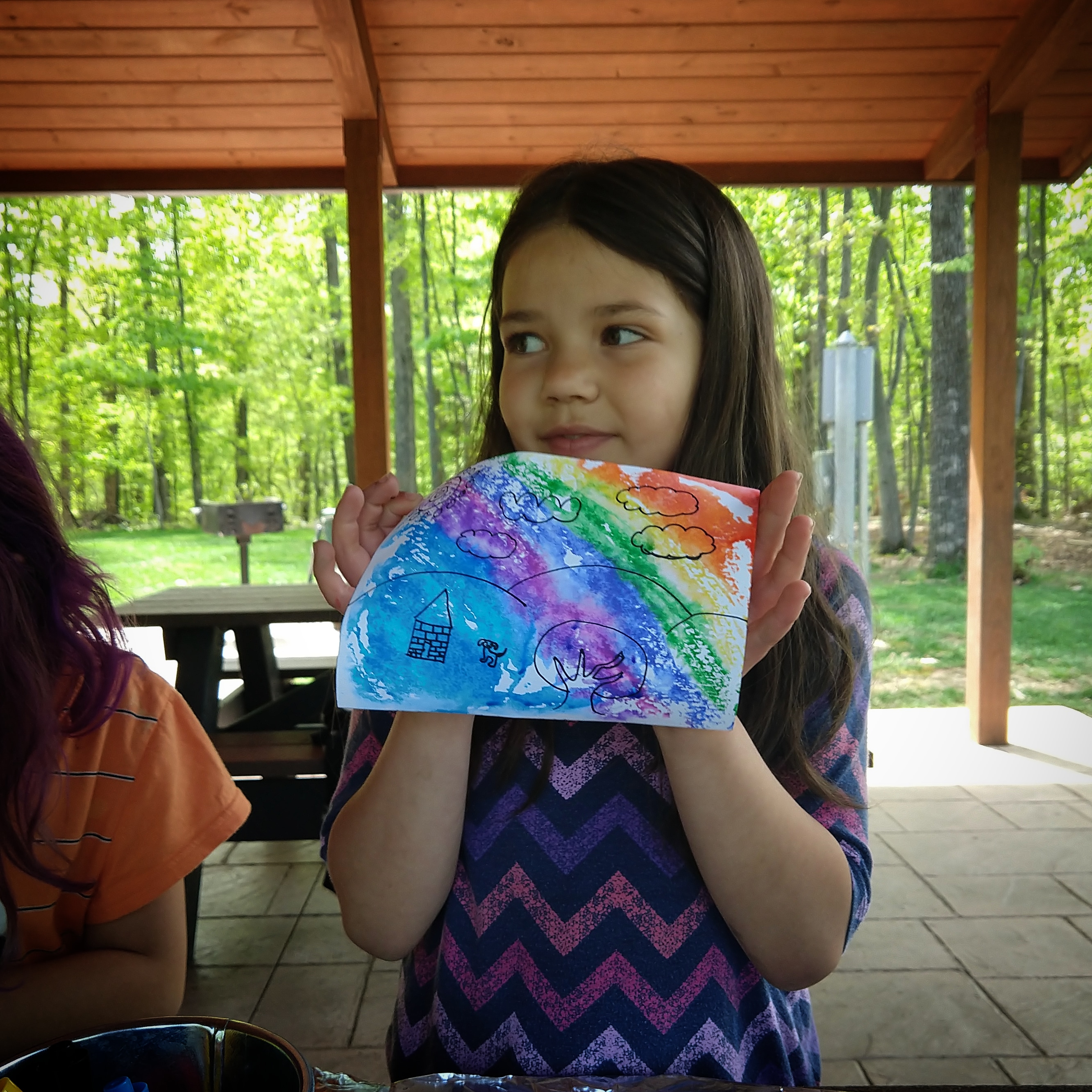 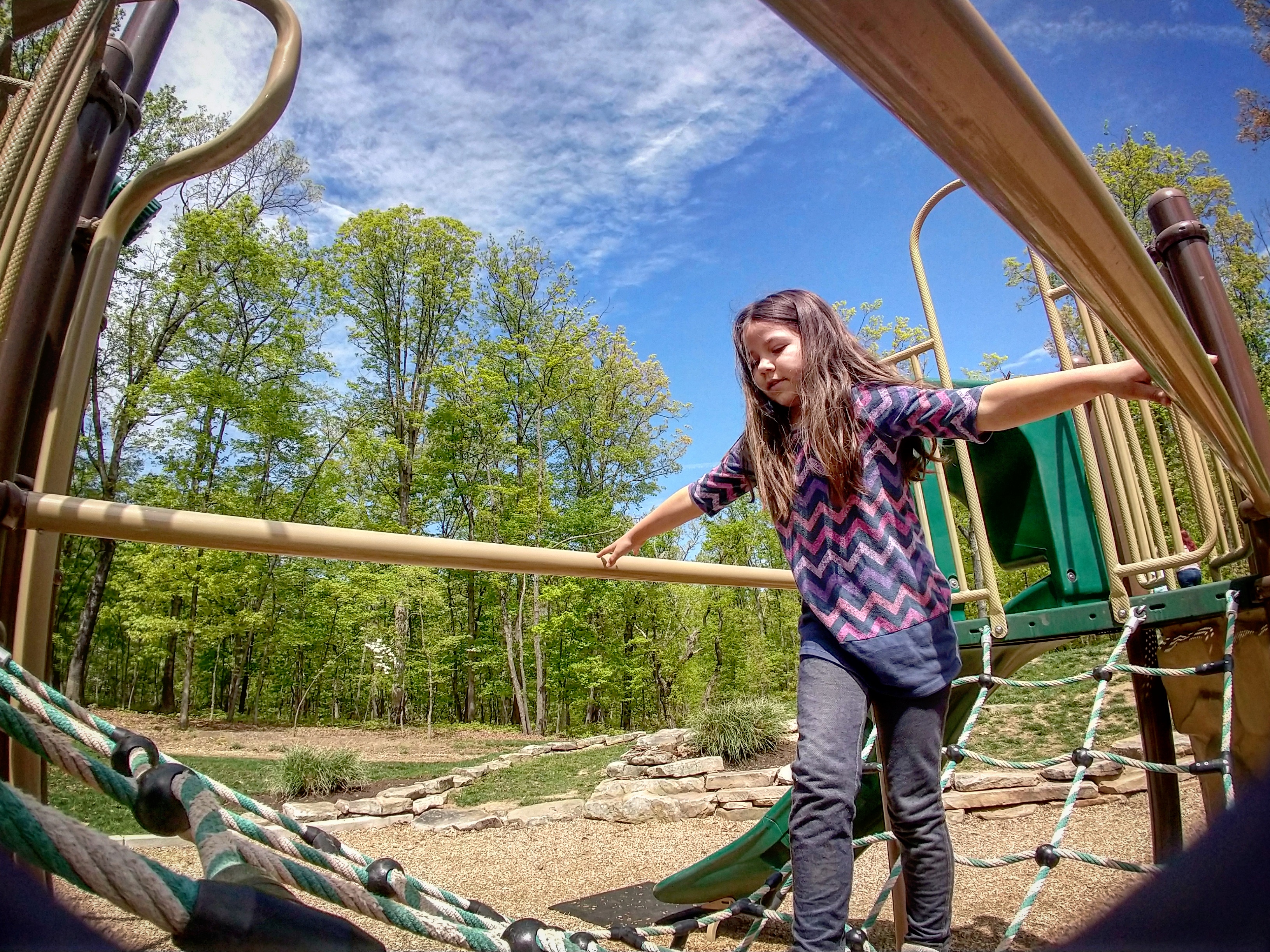 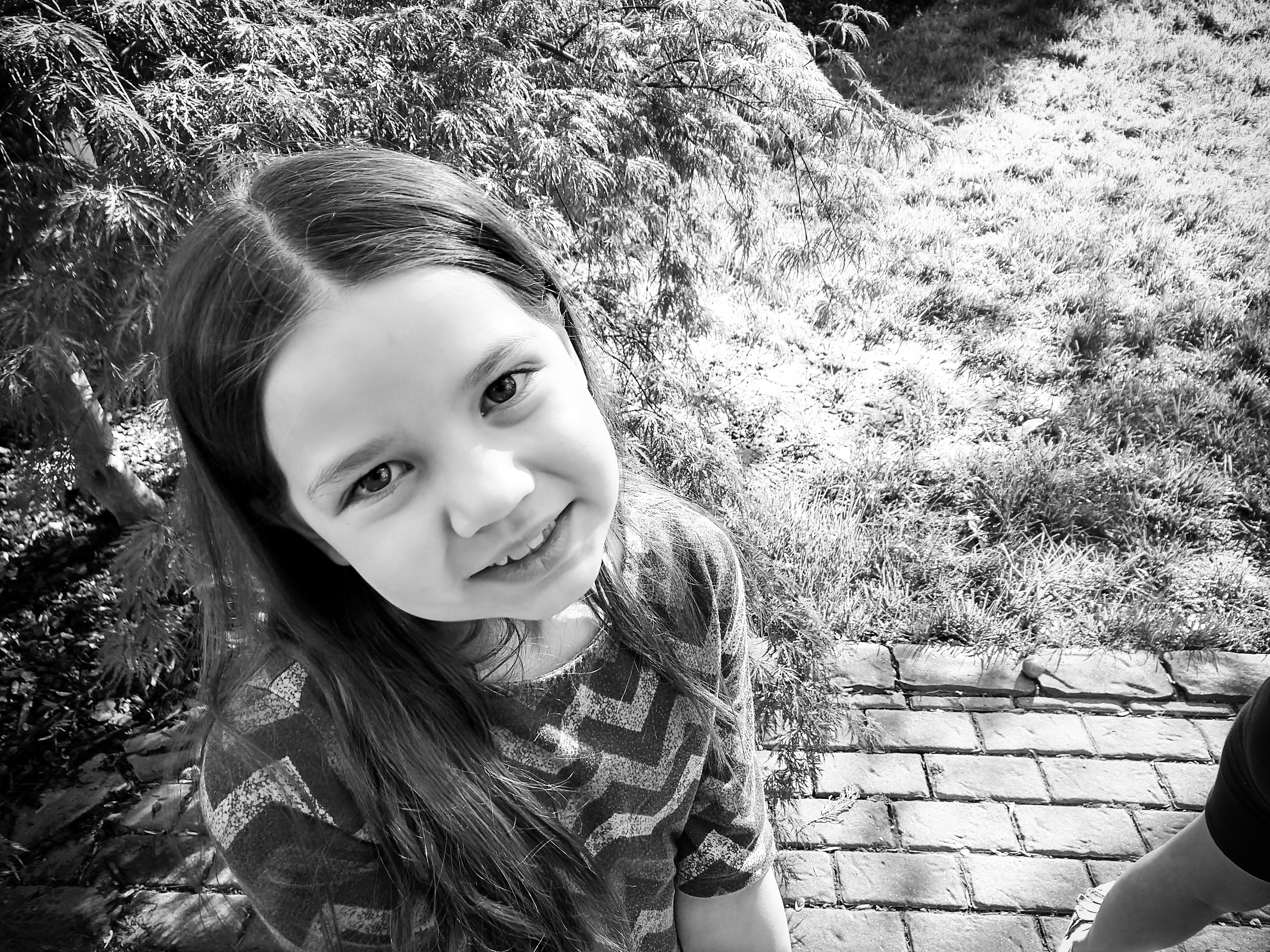 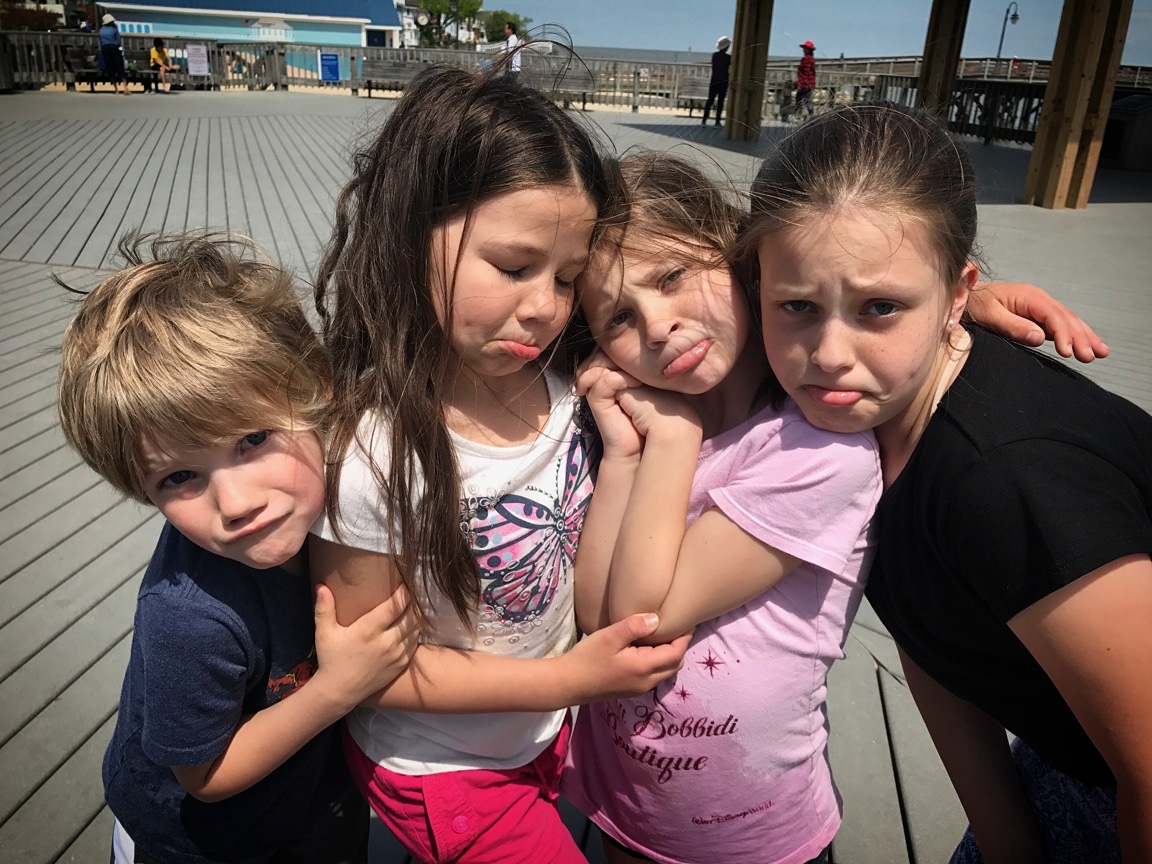 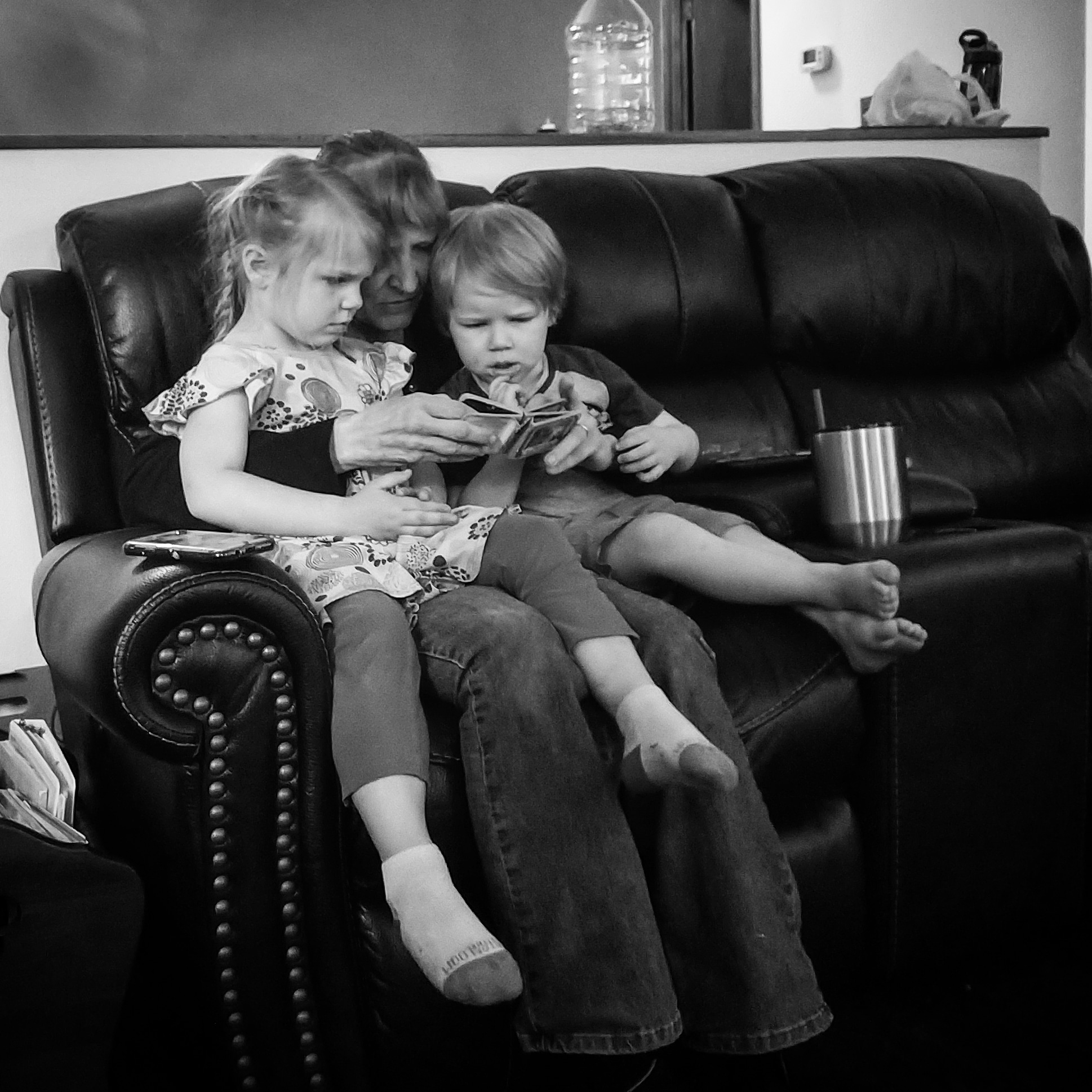