We are one full day into vacation and having a blast. The kids have gone on multiple gator rides and we spent the afternoon swimming in the lake. Everyone is worn out and sleeping soundly. They haven’t actually camped out yet, but they are planning to tomorrow night. We bought some smores fixings in anticipation. 😃

We made it! It was a long drive but the kids did great and they were so excited to get to their great grandparents farm. They got a couple of gator rides and helped Daddy and great grandpa set up the tent. 😍😍

We decided to break our driving into two chunks, so tonight we are spending the night at my parents’ house. We’ll get up early and and hopefully get an early start!

I was minding my own business this afternoon, taking my lunch break, and standing in line at Whole Foods when I got a message from my sitter to give her a call. It would appear that there was something in Baby E’s nose. I promptly called her and she reported that it looked like a small lego was shoved up into one nostril and I should probably come and get him seen. It didn’t seem to be causing any pain unless you touched his nose.

So I cut my day short and headed toward home. Thankfully I finally got ahold of the pediatrician and they were confident they could get it out so I picked him up and headed on down. Baby E spent the entire ride trying to convince me that he was all better and didn’t need to see the doctor, but one look into his nostril betrayed a shiny glimmer, and I assured him we wouldn’t be turning back until it was taken care of.

It was a pretty rough experience for Baby E, because unfortunately it was not a lego. A lego would have been easier, as it has some edges that can be hooked and grappled out, but this was a three dimensional gem crafting sticker that was about a half an inch across. It was smooth, and every time the doctor thought he had it, it would slide further up Baby E’s nose! After quite a bit of trying, and quite a lot of Baby E screaming, the doctor was finally able to retrieve it. He held it up as we all we amazed at the size of this thing. How did he possibly get that up his nose?!? The doctor said we were pretty close to having to go to the ER for them to remove it there, which would have meant putting Baby E under to do it, so I am very thankful that he was able to get it out. Baby E just sat on my lap and whimpered, “I don’t like it, mommy, I don’t like it.” It was very sad.

To make matters worse, even though he was showing zero symptoms, I asked them to run a strep test on him because his older siblings have strep and we are leaving on vacation soon. I was frustrated they had’t tested him the other day at walk in hours, but they agreed today, and sure enough he tested positive. No symptoms, but a positive strep test. I’m so glad they did the test!! We got a prescription and headed out, Baby E still lamenting the procedure. (I’m sure it hurt!)

Out of an abundance of caution, and since my kids’ symptoms were either non existent, or very unusual, I decided to stop and get a strep test done on myself. The nurse at the minute clinic took pity on me and snuck me in between patients, did a quick strep test, which came back negative, and agreed to send one off to the lab as well, but it looks like for now, I’m in the clear.

So now I have three kids on antibiotics, but I’m completely ok with that, because the two oldest are no longer contagious and Baby E will be fine this time tomorrow. Wow, I am grateful for our access to medicines. What a blessing!

We came home and the kids got a much needed early bedtime. Now I’m going to take advantage of that too, and get some sleep! 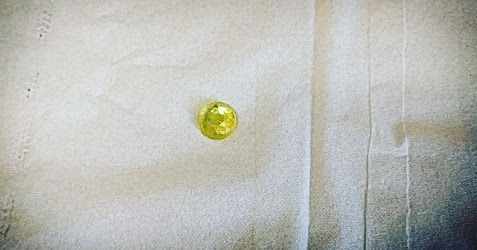 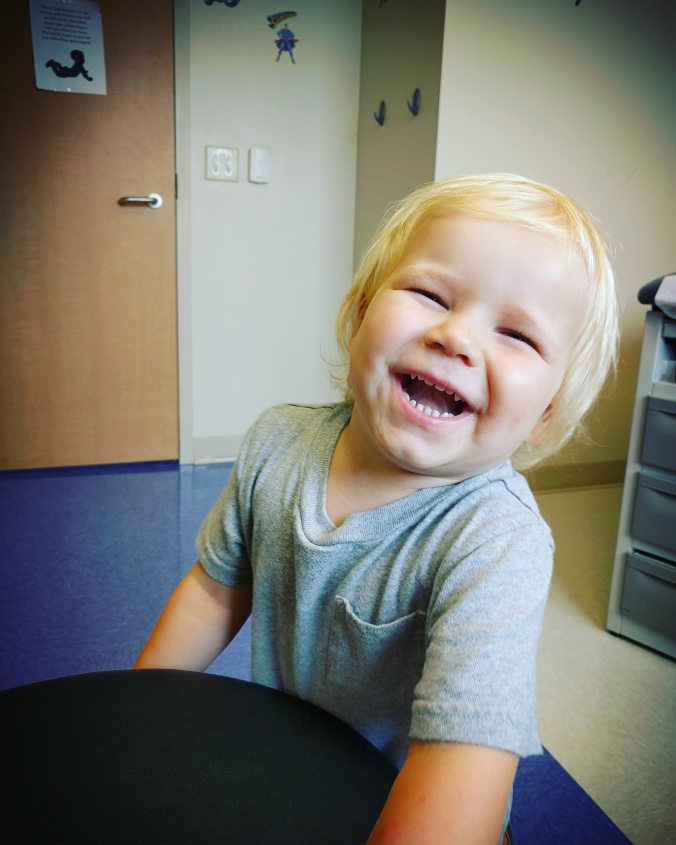 Is this the look of a kid with strep and a large gem shoved up his nose?!?

I have to admit, this is the most unconvincing bout of strep I have ever seen. I don’t doubt that is what they have, I’m just amazed at how healthy they are. I stayed home today to take care of what I expected to be one rambunctious toddler and two lethargic, scratchy throated children, but instead I had three wild and happy kids that never once acted sick.

It was a nice day with a visit from a dear friend, rock painting, movie watching, nap taking, and ending with a walk to the stinky bridge. By this evening, they were all very tired. I’m praying they sleep through the night and that Baby E remains untouched by sickness.

We leave for vacation soon and I am starting to get the tell tale signs of the anxiety that accompanies every trip. It usually ramps up at least a week before we leave, and I’ve been feeling it for a few days. I’m trying not to give it weight, as anticipation of something is usually its greatest fuel, and instead filling my thoughts and time with other things. I’m looking forward to being away with my family, to enjoying some quiet respite, and maybe even reading a book! We bought a tent and a few sleeping bags last night so that the kids and Tim can go camping while we are away. The kids tried out their sleeping bags for nap time today, and they begged to sleep in them tonight as well.

Here’s to what I hope will be an uneventful night! 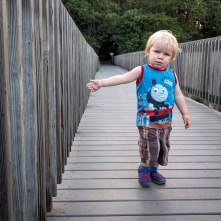 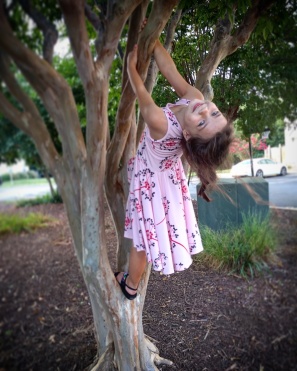 C came home yesterday complaining about a bump on the side of her neck. When I examined it closely it looked like there was a small bug bite. Since it wasn’t itching, I assumed it must have been a spider, or something similar that caused it. She said she was having problems opening her mouth wide, but other than that, she felt fine.

Big E, on the other hand, seemed kind of out of it. He looked incredibly tired and was eager to get to bed.

At 4 in the morning, Big E woke up crying and when I went in he was definitely running a fever. We had a very rough rest of the night, and no one got much more sleep. When it was time to get up, Big E went to his grandma’s house, and since the other two were fine, they went to the sitter’s house.

Tim got off work early today, and when he grabbed the kids, he took them down to the walk in hours at the pediatrician to have Big E looked at, especially since we have vacation coming up. While they were there, I asked him to have them look at C’s bug bite.

I got a text on my way home that the bump on her neck was not in fact a bug bite, but rather both C and E were diagnosed with strep throat. Ugh!! But yay, because as you know, strep is cured with an antibiotic. By evening tomorrow they will no longer be contagious. Now I’m just praying that it steers clear of Baby E.

It’s been a couple of months since we were sick, so I guess we were overdue! 😉

“I need to wear this because it helps me paint rocks better.”

This evening C asked if we could paint rocks tonight when we got home, so that’s what we did. She is looking forward to hiding them in the community tomorrow evening. 😃

This was a crazy long and busy weekend, but it was wonderful. 🙂 As a steering member for our local MOPS/Moms Next Group, we met for our summer retreat to help plan the coming year’s meetings. I always look forward to this weekend, as I get to gather with some dear friends, focus on the women that partake in this ministry, and draw closer to God and the lovely women he has put in this group. We spent the weekend discussing topics and planning events, while also taking a little time to invest in our friendships. I am sad to see it end, but I am excited to see how God uses MOPS this year to meet needs of moms within our church and larger community! 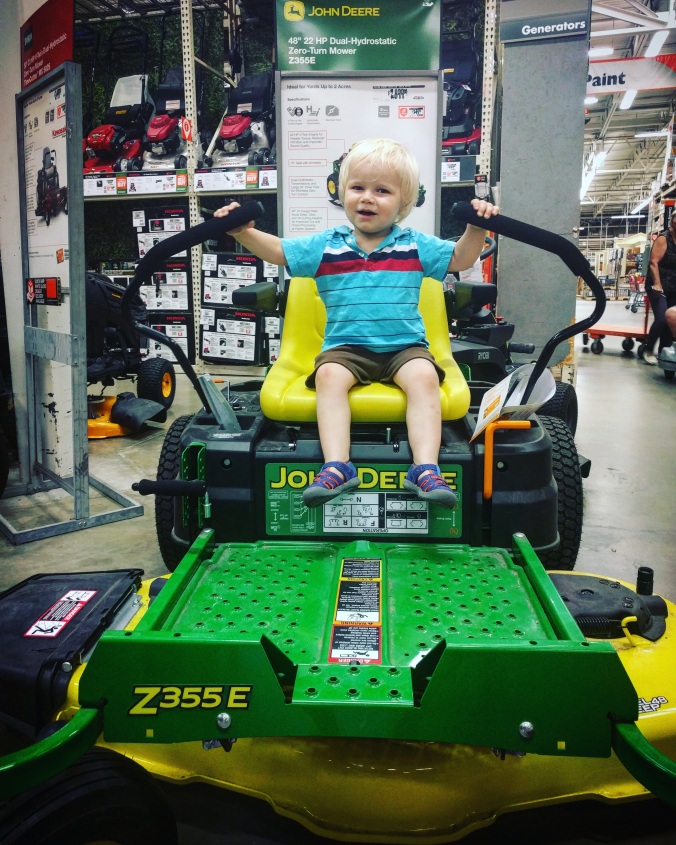 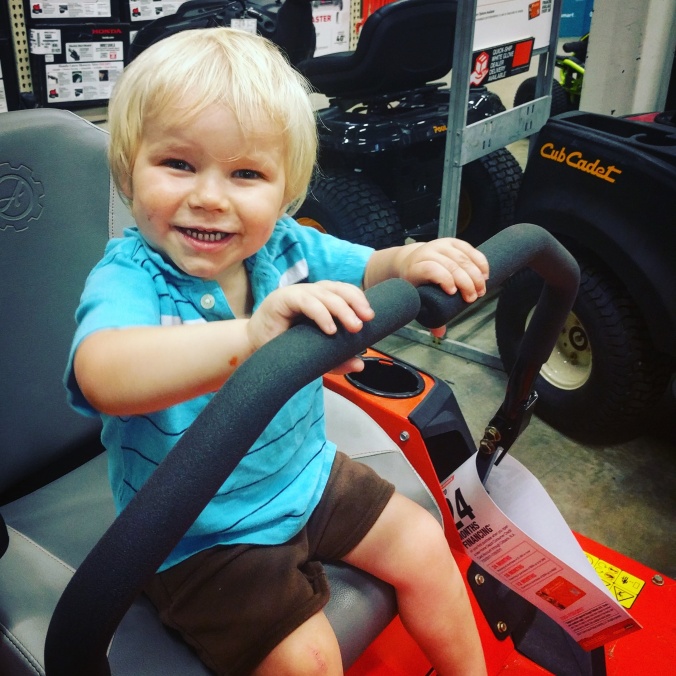 I got to end my weekend with these two handsome gentlemen! 🙂

I had every intention of posting about MOPS retreat today, but as I pulled into the parking lot at home tonight I saw my husband was home. I haven’t seen him since early Monday morning, so instead of spending time on my computer, I hung out with my best friend catching each other up with our lives. Definitely time well spent! 😍😍