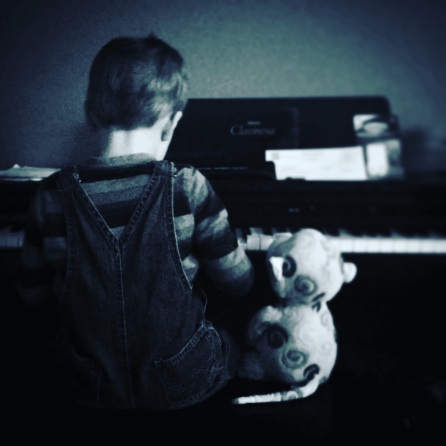 I distinctly remember the sound of the bed being wheeled down the hallway, briskly, but not with the same urgency that had taken us to the ultrasound room in the first place. Tim was walking beside me, his eyes cast down, his gait heavy. The automatic doors cranked open and shut as we weaved our way through the hallways back to the Emergency Room. They wheeled my bed back into my room, the nurse said something I don’t think I ever heard and then she left. As the curtain stopped swaying and the door slid shut, Tim crawled into the bed next to me and pulled me closer to him. I laid my head on his chest.

I knew he had seen the ultrasound screen, that he knew the truth… but he didn’t offer it and I didn’t ask. I would know soon enough. I wanted to hold on for as long as I could to the hope, be it ever the slightest glimmer, that my child would survive. And try as I did to believe my lie, there were tears in his eyes that betrayed what I feared.

So we sat there in silence.

I’m not sure why that surfaced tonight. That’s the strange thing about grief, it ebbs and flows with little reason.