I have an overactive imagination. I always have. I have to be careful what I watch or read, because it’s very easy for my mind to get carried away and before I know it, I’m in over my head.

A few weeks ago I discovered reddit. There’s a subreddit there called AskReddit, and you can go on and ask a question and random people from the internet will answer you. It’s much more anonymous than other social media outlets. The questions vary greatly from things like, “What’s the best joke you’ve ever heard?” to “What’s the worse way you could possibly die?” Last night I ran across one that asked what was the creepiest or most mysterious thing you had every experienced. I clicked on it and followed a rabbit trail I had no intention of following. For about a half hour I scrolled through story after story of peoples’ strange experiences. I’m sure a lot of them were lies, and many were alcohol or drug induced. Some seemed easily explainable and some were just downright creepy. There was one where a girl woke up in the morning from camping and was scrolling through her phone only to find pictures of herself sleeping in her tent. Another one was a man in the middle of nowhere, miles from civilization, when he hears the sound of something approaching, turns around, and sees a man on a unicycle ride right past him. Some talked about how they were almost kidnapped as children. Others talked about strange noises in their houses, odd animals in the shadows, or strange lights in the sky.

When I looked up from my phone I realized that it was way past when I should have been in bed. It also occurred to me that reading those stories was probably the stupidest thing I could have done right before bedtime, especially when I was home alone. My imagination started running wild and I heard sounds that weren’t there, and suspicious shadows creeping up the walls. But, I’m a grown up and it’s silly to be nervous in my perfectly safe house, so I took a deep breath, turned off my lights, and hopped into bed. As I pulled the covers up to my neck, I chided myself for being so ridiculous.

And at that exact moment my closet door swung open with a loud, menacing screech. I jumped out of bed and screamed. I looked around for something to use as a weapon to ward off whatever monster had been hiding in the depths, and as my heart pounded and my eyes adjusted to the darkness, Molly nonchalantly walked out of the closet. Apparently I had closed the closet door, unaware that she had been napping in there. My heart was beating so fast as relief flooded my body. She had given me quite a startle and it took awhile to calm myself down enough to fall asleep! 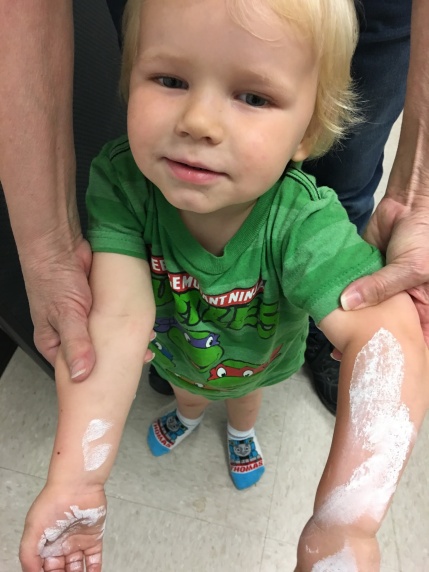 Apparently Baby E was ‘helping’ with some painting today. Oops! 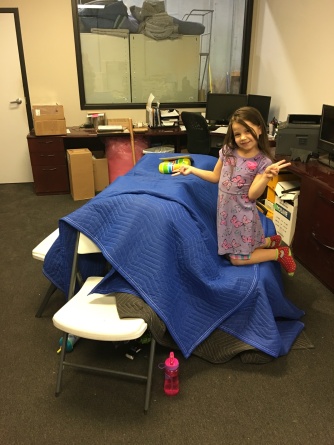 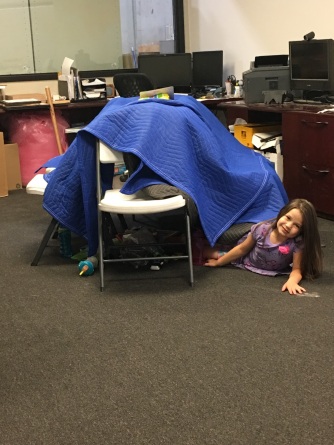 Is there anything better about childhood than building a fort?!?!