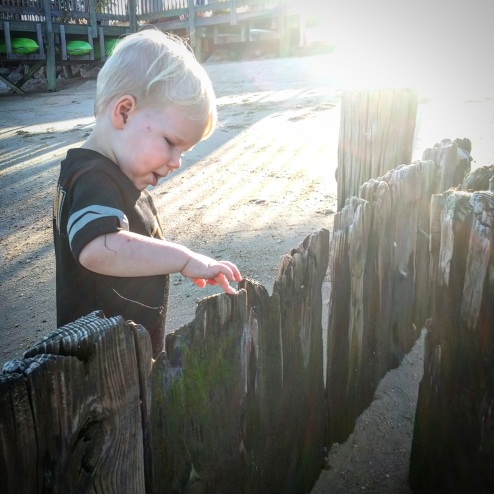 I was either feeling incredibly brave, or incredibly reckless when I agreed to take the kids to the beach and farmers market this evening. If we go on Friday evenings, we get there early, play on the beach, hit up the kettle corn stand and head straight to the car. But this evening I decided that I wanted to buy a dozen eggs, which meant herding my three tired, hungry children through large crowds at something that resembled the speed of a sloth. And after some grumbling, falling down, crying about staircases, and complaining about not getting candy and ice cream (ummm… you had kettle corn) I finally rallied the troops and got them into the van. By the time we got home Tim was there to help me unload.

As the big kids went upstairs to change, I started dinner (scrambled eggs) and Baby E asked to go to the bathroom. You got that right… he sat on the toilet! And he used it!!! Proud mommy moment, and since this is the closest thing I have to a baby book for these kids, I’m recording it here!!

Anyways, as I walked back into the kitchen after praising him for a job well done, I noticed that Molly was jumping and hitting at the kitchen window. When I got closer I noticed two frogs on the outside window pane (ten feet from the ground!) One was an adult, probably about three inches in length, and the other was a much smaller one, perhaps an inch. I called Tim to bring Baby E in quickly so that he wouldn’t miss the chance to see the frogs.

They rushed in and looked at the window. Tim decided to open it to see if he could catch the big frog for Baby E to take a closer look. As he reached out, the frog jumped to the side, and Tim spent a solid minute trying to grasp him. All of a sudden the frog leapt through the open window and landed square on Baby E’s naked chest. Naturally, confronted with a good sized frog on his belly, Baby E broke out into hysterics. The other kids ran in to see what was happening, as he stood there screaming with a frog stuck to his chest. . As Tim reached for the frog, it jumped off of Baby E and started leaping around the room, much to the delight and horror of the big kids. Baby E was pretty much traumatized, standing in place, with frog juice smeared across his chest. The next few minutes could have come straight from a three stooges episode as Tim followed the frog around the kitchen as it jumped from place to place, capturing him, watching him escape, and catching him again. Finally, after showing the big kids a close up view of the frog, he set him outside the opened window.

Poor Baby E was still very upset about the whole incident and kept talking about the mommy frog on his belly, so I’m pretty sure it’ll be a while before he is fine being near frogs again. But in all honesty, it was one of the funniest things I’ve ever seen and Tim and I couldn’t stop laughing. Tim took Baby E upstairs to scrub all the frog stuff off of him, and he returned a much calmer and happier child.

So if you see Baby E, and he is in a talkative mood, you should ask him about the mommy frog that paid him a visit! 🙂