This evening we invited some friends over to go trick or treating with us. Unlike the community we used to live in, the houses here are more spread apart and require a lot of walking to get to each one. We hit about half the neighborhood before calling it a night and heading home. The kids seemed to enjoy their time very much and having their friends go along with them was very special. I’m incredibly grateful for this particular family that has watched the kids quite a few times since my dad got sick. 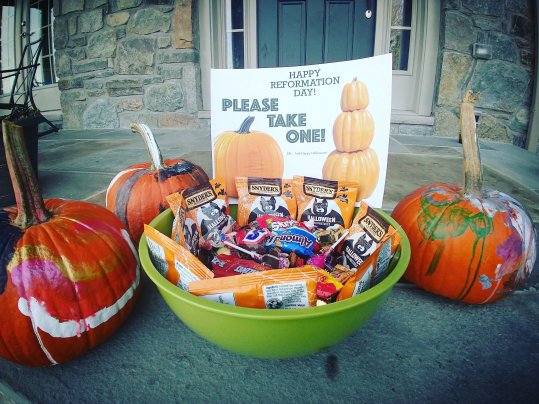 Yesterday my father started radiation. When we were first approached about his treatment before his spinal surgery, we were told that they wanted to do Cyber knife Radiation on him. I had never heard of it before but in researching it more I liked the idea. Cyber knife is much less intrusive than traditional radiation treatments. There are little to no side effects, and the radiation beams can be pinpointed to hit only the cancerous areas. This leads to fewer infections and better quality of life during treatments. As they explained the treatment they told us that it would be approximately 10 sessions, each lasting about 15 minutes. When we got the call last week that he would be starting this week we figured we were in for a few rough weeks of travel, etc. He went to his first appointment yesterday where we learned that it wasn’t going to be 15 minutes, but rather one and a half hour!! However, he would only need three treatments and they were all scheduled for this week!! Such great news.

Unfortunately, Dad started having pain in his side yesterday (unrelated to the radiation as far as we can tell) and this afternoon we decided to take him in and have it looked at. They decided to keep him in the hospital overnight because it appears he has some fluid build up that needs to be addressed. He has been transferred to the hospital that is also doing the radiation treatments, so we will see if he can do his last two sessions this week, or not.

I know dad is frustrated by this set back, as we all are, but we know that God is still in control. Please join me in praying for wisdom for the doctors, a short hospital stay, relief for his pain, and the ability to continue with his radiation treatments. Thank you again so much for your prayers!