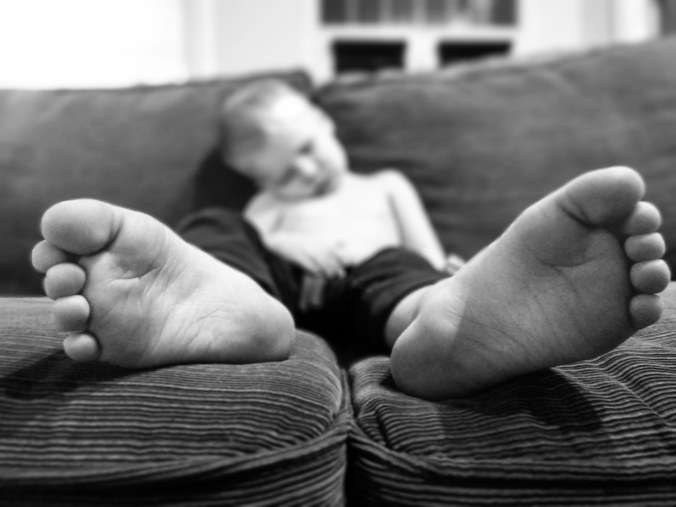 BabyE is an unusual kid, and I mean that in the best possible sense. He might be my most strong willed, but he is also the one with the most unique personality and perspective on life. I kept that in mind when we went shopping for his birthday and in the end he wound up with an unusual assortment of gifts that completely fit his personality.

He has recently fallen in love with the cello and enjoys watching and listening to cello music. When I saw a kids ukalele in the store, I knew he would see it as a cello and be enamored. He enjoys tuning the strings to different pitches.

He also received a fiber optic speaker. Yes, an unusual gift for a four year old, but hear me out. The speaker lights up and glows through fiber optic ‘hairs’ that stick straight up. You can plug your phone into it, but he has no idea it’s a speaker. To him it is a beautiful head of hair that lights up in the darkness. It’s also his new favorite thing to cuddle with at night.

Whenever we are outside Baby E keeps an eye out for two things… Fungi and feathers. We got him a six pack of feathers from a craft store and his eyes lit up at this strange gift. “Can I take them in the bath???” He asked giddily. He held each one in his hands and admired its beauty. I think the feathers might have been his favorite gift.

He got a few other presents, and I loved his reaction to each one. None of them would have been typical four year old presents, but each one struck a chord with him.

I think his creativity and imagination will carry him far!