I struggled this evening on what to title this blog posting. I narrowed it down to two titles- “The Day I Bought Ten Boxes of Oatmeal” or “The Day A Hammer Fell On My Head.” In the end, oatmeal won because I had recently referenced oatmeal on the day my phone died, so we will start there.

It all started with Dinosaur Egg Oatmeal, as it increasingly does. I found some Dinosaur Egg Oatmeal at the store on Friday night and brought it home to some very excited children. But by this morning they had pretty much finished it off. That’s right, 36 hours and the box was nearly empty.

But this evening I came to the uncomfortable realization that I had run out of diapers and HAD to go to the store. While I was there, I noticed that the oatmeal was on sale…. Really, really on sale. In fact, if you bought one Quaker brand oatmeal, you would get a store brand oatmeal free. Great deal, right?!?! But wait, it gets better. I checked their stack of Dinosaur Egg Oatmeal and directly next to it was a stack of Animal Adventures Oatmeal (which is pretty much dinosaur egg oatmeal, but instead it hatches animals and vaguely tastes like strawberry.) And the Animal Adventures Oatmeal was even more on sale- $1.31/box. So, for every box of Animal Oatmeal I bought, I’d get store brand oatmeal for free. I grabbed four boxes of animal and one box of apple cinnamon, and then chose out my 5 free boxes of oatmeal- for a grand total of 10 boxes of oatmeal for $7.94. Yup, $.79 each. I’d say that was a grocery win! (unless my children suddenly decide that they don’t like the strawberry flavored animals, in which case my oatmeal is up for grabs.) 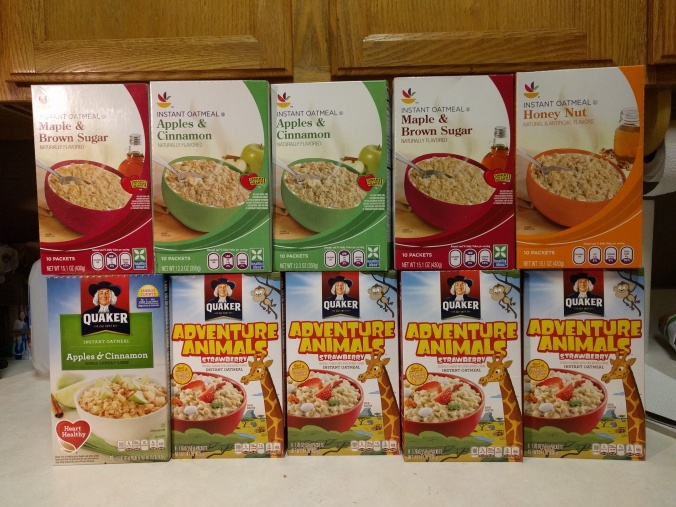 It’s stacked in this neat pile so the kids will get a little oatmeal shock and awe in the morning… And then I have to find a place to store ten boxes of oatmeal. 🙂

As for my hammer story, Tim and I are doing a late summer cleaning of our house. It’s like a spring cleaning, except we are procrastinators, so it’s happening in August. Tim had been cleaning out the utility closet (also known as the closet I throw random junk in all the time so I don’t have to look at it), and I told him I would put all the cleaning supplies back on the shelves. They were all piled in the kitchen, and I diligently placed them on the shelves. At one point I lost my balance slightly and leaned up against one of the shelving units, which apparently made the other shelving unit move just enough to dislodge a hammer that was sitting on the top shelf (way above my eye level) and send it plummeting down ONTO MY FOREHEAD. I’m pretty sure the handle hit me first, and my lighting fast reflexes made my one hand push it out of the way quick enough to make it flip through the air before I caught it in my hand. If only I had video footage of this most amazing feat. I stood in the closet for a moment, making sure I didn’t have a hammer shaped hole in my head before calling out to Tim to come quickly! A HAMMER JUST FELL ON MY HEAD!!!! Thankfully besides being surprised, I walked away with only a slight bruise on my forehead. Man, that could have been so much worse.

So now I am off to bed, to dream about oatmeal deals and vengeful hammers. Hopefully tomorrow will be uneventful. 🙂